The last time the two sides met, the Gunners gave the Reds a 4-1 drubbing at the Emirates Stadium, with stunning goals from Hector Bellerin, Mesut Ozil, Alexis Sanchez and Olivier Giroud.

Arsene Wenger recalled Alexis Sanchez to the starting lineup against Crystal Palace last week, following the Chilean’s cameo off the bench on the opening day.

The Gunners switched to a 4-2-3-1 formation, with Alex Oxlade-Chamberlain dropping out, and Sanchez deployed on the left flank. Aaron Ramsey was handed the right wing berth, with Santi Cazorla dropping back to the double pivot role alongside Francis Coquelin.

Wenger also made a change in defence, with Hector Bellerin reclaiming the right-back role from Mathieu Debuchy having recovered from a muscle injury.

Wenger opted to retain Olivier Giroud at the head of the attack, and the Frenchman repaid the faith with the opener against the Eagles.

Theo Walcott offers an alternative option to lead the line, though may once again find himself on the bench, with Arsenal perhaps fielding an unchanged side.

Danny Welbeck is three weeks away from a return to training, while Tomas Rosicky and Jack Wilshere remain on the sidelines with knee and ankle problems respectively. 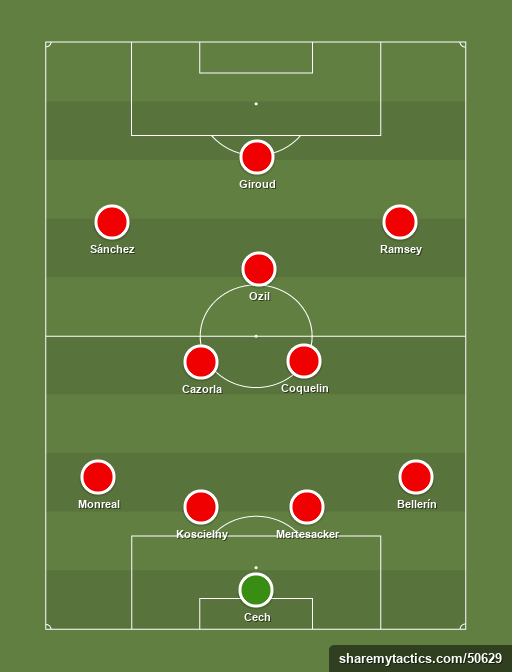