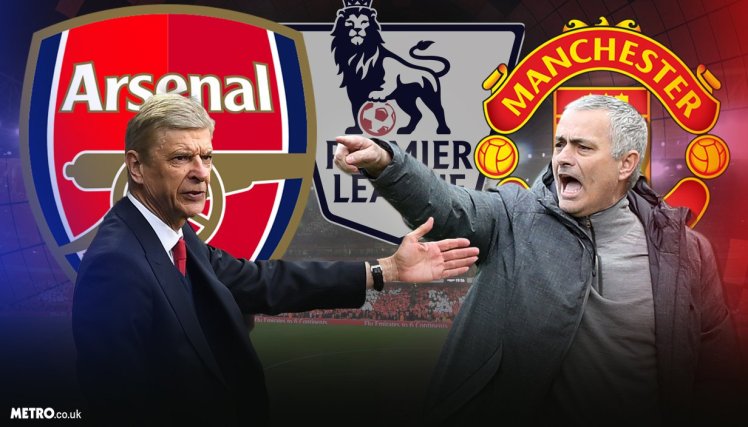 Arsenal face an uphill battle yet again in the English Premier League when they take on Manchester United at the Emirates Stadium on Sunday.

The clash between the bitter old rivals would be one which both would desperately want to claim all three points from the encounter. Not because they are battling for the League title, but being that both teams are scrapping for the fourth place on the Premier League table in other to stand a chance of competing in Europe’s most prestigious club competition – The UEFA Champions League.

Arsene Wenger and his men are considered less favourite going into this clash despite being the host and expected to have the backing of the Emirates fans.

To be honest, the Gunners have been far from convincing in their bid to get into the top four this season with a series of highly disappointing performances since the start of the year.

An embarrassing 2-0 defeat to bitter local rivals Tottenham Hotspurs and an even humiliating 3-0 thrashing at the hands of fellow London rivals Crystal Palace in the space of one month have left the Gunners jostling the 6th and 7th positions on the Premier League table.

The fans won’t be exactly happy with their team ahead of the clash but would be forced to get behind them to avoid another humiliation by their arch rivals on their home turf as well as hang on to what would possibly be their final life-line in the race to secure the fourth spot.

Jose Mourinho and his men would go into the clash against Arsene Wenger and his men with the hope of causing more misery to the Gunner’s hope of clinching the fourth spot as well as the Portuguese continuing his unbeaten record against Wenger.

It is no news that the Red Devils are considered favourites by major betting sites going into the clash at the Emirates stadium, with United’s unbeaten run stretching back several months.

Mourinho would be hoping his 100 percent unbeaten record against Wenger would come to play yet again when the two managers go against each other on Sunday despite his hugely depleted team.

Arsenal are the better side going into the clash in terms of players available at Wenger’s disposal; with only Santi Cazorla out of the team until the end of the season due to a long term injury.

Manchester United are facing a major injury crisis at the moment and at some point last week, they had as much as nine players out of the team due to injuries or suspension.

But Paul Pogba, Chris Smalling and Juan Mata featured in their 1-0 victory on Thursday against Celta Vigo in first leg semi-final clash of the Europa League and would expected to play a part against the Gunners on Sunday at the Emirates Stadium.

However, United will be without key players in Zlatan Ibrahimovich and Luke Shaw as well as Eric Bailey.

Although United have been labeled favourites to get all three points against Arsenal at the Emirates Stadium, many naturals would see the game ending in a stalemate, with Arsenal fans expected to back their team to at least get a draw off a depleted Manchester United side.

Who knows, Arsenal may very well clinch all three points given how desperate they are to keep their hopes of finishing the top four alive.